“So we define a quantum geometry for the nucleus in the simplest atom, say Hydrogen. The hydrogenic nucleus is a single proton of quark-structure udu and which we assign a quantum geometric template of Kernel-InnerRing-OuterRing (K-IR-OR), say in a simple model of concentricity. We set the up-quarks (u) to become the ‘smeared out core’ in say a tripartition uuu so allowing a substructure for the down-quark (d) to be u+InnerRing. A down-quark so is a unitary ring coupled to a kernel-quark. The proton’s quark-content so can be rewritten and without loss of any of the properties associated with the quantum conservation laws; as proton-> udu->uuu+IR=KKK+IR. We may now label the InnerRing as Mesonic and the OuterRing as Leptonic.

The OuterRing is so definitive for the strange quark in quantum geometric terms: s=u+OR. A neutron’s quark content so becomes neutron=dud=KIR.K.KIR with a ‘hyperon resonance’ in the lambda=sud=KOR.K.KIR and so allowing the neutron’s beta decay to proceed in disassociation from a nucleus (where protons and neutrons bind in meson exchange); i.e. in the form of ‘free neutrons’. 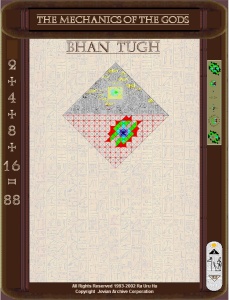 The neutron decays in the oscillation potential between the mesonic inner ring and the leptonic outer ring as the ‘ground-energy’ eigenstate.

There actually exist three uds-quark states which decay differently via strong, electromagnetic and weak decay rates in the uds (Sigmao Resonance); usd (Sigmao) and the sud (Lambdao) in increasing stability.

This quantum geometry then indicates the behaviour of the triple-uds decay from first principles, whereas the contemporary standard model does not, considering the u-d-s quark eigenstates to be quantum geometrically undifferentiated.

The nuclear interactions, both strong and weak are confined in a ‘Magnetic Asymptotic Confinement Limit’ coinciding with the Classical Electron radius Re=ke2/mec2 and in a scale of so 3 Fermi or 2.8×10-15 meters. At a distance further away from this scale, the nuclear interaction strength vanishes rapidly.

The wavenature of the nucleus is given in the Compton-Radius Rc=h/2πmc with m the mass of the nucleus, say a proton; the latter so having Rc=2×10-16 meters or so 0.2 fermi.

The wave-matter (after de Broglie generalising wavespeed vdB from c in Rcc) then relates the classical electron radius as the ‘confinement limit’ to the Compton scale in the electromagnetic finestructure constant in Re=Alpha.Rc.

The extension to the Hydrogen-Atom is obtained in the expression Re=Alpha2.RBohr1 for the first Bohr-Radius as the ‘ground-energy’ of so 13.7 eV at a scale of so 10-11 to 10-10 meters (Angstroems).

These ‘facts of measurements’ of the standard models now allow our quantum geometric correspondences to assume cosmological significance in their isomorphic mapping. We denote the OuterRing as the classical electron radius and introduce the InnerRing as a mesonic scale contained within the geometry of the proton and all other elementary baryonic- and hadronic particles.

Firstly, we define a mean macro-mesonic radius as: rM=1⁄2(rF+rG)~ 3.42×1011 meters and set the macro-leptonic radius to rE=3.44×1014 meters. Secondly, we map the macroscale onto the microscale, say in the simple proportionality relation, using (de)capitalised symbols: Re/Rm=rE/rM.

We can so solve for the micro-mesonic scale Rm=Re.rM/rE ~ 2.76×10-18 meters. So reducing the apparent measured ‘size’ of a proton in a factor about about 1000 gives the scale of the subnuclear mesonic interaction, say the strong interaction coupling by pions.

The (anti)neutrinos are part of the electron mass in a decoupling process between the kernel and the rings.

We may define the kernel-scale as that of the singular spacetime-quantum unit itself, namely as the wormhole radius rw=10-22/2π meters.

So for matter, a W-Minus (weakon) must consist of a coupled lepton part, yet linking to the strong interaction via the kernel part. If now the colour-charge of the gluon transmutates into a ‘neutrino-colour-charge’; then this decoupling will not only define the mechanics for th strong-weak nuclear unification coupling; but also the energy transformation of the gauge-colour charge into the gauge-lepton charge.

So generally, we may state, that the gluon is unfied with a weakon before decoupling; this decoupling ‘materialising’ energy in the form o mass, namely the mass of the measured ‘weak-interaction-bosons’ of the standard model (W- for charged matter; W+ for charged antimatter and Zo for neutral mass-currents say).

So, using our quantum geometry, we realise, that the weakly decoupled electron must represent the OuterRing, and just as shown in the analysis of QED (Quantum-Electro-Dynamics). Then it can be inferred, that the Electron’s Antineutrino represents a transformed and materialised gluon via its colourcharge, now decoupled from the kernel.

Then the OuterRing contracts (say along its magnetoaxis defining its asymptotic confinement); in effect ‘shrinking the electron’ in its inertial and charge- properties to its experimentally measured ‘point-particle-size’. Here we define this process as a mapping between th Electronic wavelength 2πRe and the wormhole perimeter λw=2πrw.

But in this process of the ‘shrinking’ classical electron radius towards the gluonic kernel (say); the mesonic ring will be encountered and i is there, that any mass-inductions should occur to differentiate a massless lepton gauge-eigenstate from that manifested by the weakon precursors.

This so defines a neutrino-oscillation potential at the InnerRing-Boundary. Using our proportions and assigning any neutrino-masses mυ as part of the electronmass me, gives the following proportionality as the mass eigenvalue of the Tau-neutrino:

So we have derived, from first principles, a (anti)neutrinomass eigenstate of 3 eV.

This confirms the Mainz, Germany Result as the upper limit for neutrino masses resulting from ordinary Beta-Decay and indicates the importance of the primordial beta-decay for the cosmogenesis and the isomorphic scale mappings stated above.

The hypersphere intersection of the G- and F-count of the thermodynamic expansion of the mass-parametric universe so induces a neutrino-mass of 3 eV at the 2.76×10-18 meter marker.

The more precise G-F differential in terms of eigenenergy is 0.052 eV as the mass-eigenvalue for the Higgs-(Anti)neutrino (which is scalar of 0-spin and constituent of the so called Higgs Boson as the kernel-Eigenstate). This has been experimentally verified in the Super-Kamiokande (Japan) neutrino experiments published in 1998 and in subsequent neutrino experiments around the globe, say Sudbury, KamLAND, Dubna, MinibooNE and MINOS.

This Higgs-Neutrino-Induction is ‘twinned’ meaning that this energy can be related to the energy of so termed ‘slow- or thermal neutrons’ in a coupled energy of so 0.0253 eV for a thermal equilibrium at so 20° Celsius and a rms-standard-speed of so 2200 m/s from the Maxwell statistical distributions for the kinematics.”